poetic reality no18: The Waste Land’s Centenary Part 1 – Roots, Bodies and Boundaries: A Waste Land for a New Century 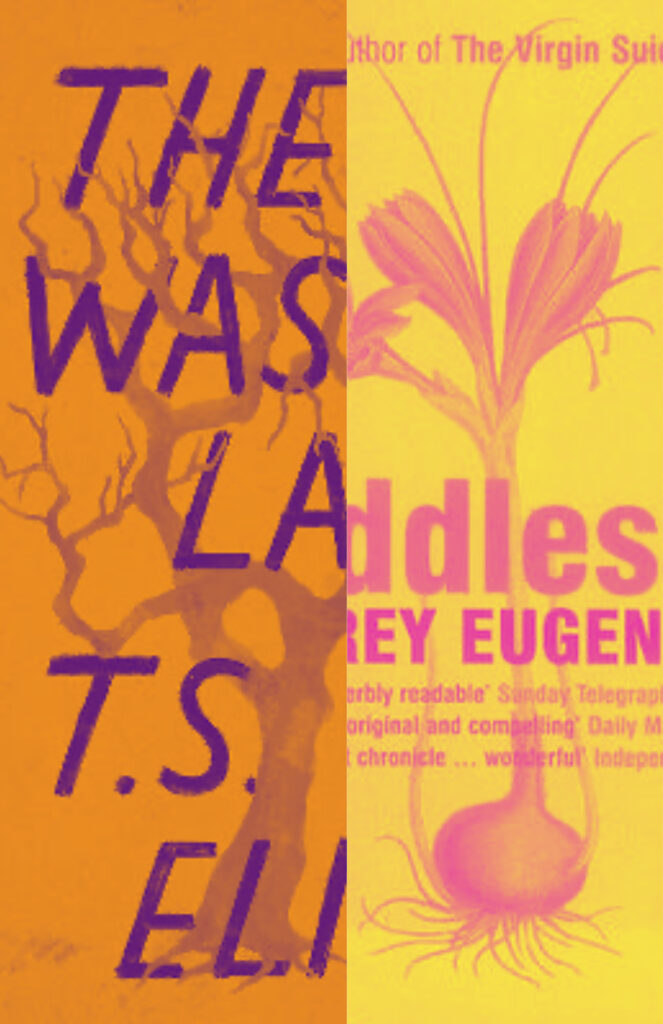 poetic reality no18: The Waste Land’s Centenary Part 1 – Roots, Bodies and Boundaries: A Waste Land for a New Century

Roots, Bodies and Boundaries: A Waste Land for a New Century

The year 2022 marks the centenary of T. S. Eliot’s The Waste Land. In October 1922 The Waste Land first appeared in the pages of The Criterion and an encounter with Mr Eugenides was recounted at the Cannon Street Hotel in London’s financial centre, the City, and very close to Lloyds Bank where Eliot was learning about “the nature of money economy”.[i]Smyrna, as Paul Valéry had written in 1919, was then as much a part of Europe as Athens and Marseilles. For Eliot, it wasone of the “potential Sarajevos” created after the convention of Versailles.[ii] Even though Eliot claimed he had indeed met a Smyrna merchant with this name, the satirical overtones of his name (“well-born”) are linked to the racial and cultural overtones such a persona would have for a contemporary reader.[iii] The Smyrna merchant, representing the feared Oriental other tainting concepts of healthy Englishness, addressed an age of accelerating xenophobia. The various connotations of the Smyrna merchant in The Waste Land, as another Eastern influence on the West (much like Eliot’s Jewish Bleistein), as a comment on the prophecies of doom cultivated by the eugenicists in pre-war Britain, and, finally, as a theatrical act parodying all the above in a serious exaggeration of reality, evidence Eliot’s blend of politics and culture.[iv] The appearance of a merchant from Smyrna, whose name resists easy classifications, in a seminal Modernist poem of the interwar period written by an American immigrant in London highlights the fragility of either pure roots or purely defined boundaries emerging in post-1922 Europe.

Eighty years after the publication of The Waste Land, Mr Eugenides and Smyrna were revisited in Jeffrey Eugenides’ novel Middlesex (2002). “Smyrna endures today in a few rebetika songs and a stanza from The Waste Land,” we read, “Everything you need to know about Smyrna is contained in that. The merchant is rich, and so was Smyrna. His proposal was seductive, and so was Smyrna, the most cosmopolitan city in the Near East. […] In Smyrna, East and West, opera and politakia, violin and zourna, piano and daouli blended as tastefully as did the rose petals and honey in the local pastries.” (Middlesex, 50) Rich, seductive and cosmopolitan Smyrna becomes the scene of trauma as the novel’s protagonist recounts and relives his grandparents’ uprooting from the East and their subsequent journey westward. The novel dedicates a dozen pages to the night pre-1922 Smyrna disappeared from the map (Middlesex, 50-62). Time before 1922, when there were two non-homogeneous entities living in the two sides of the Aegean, is thus linked to time after 1922, when a compulsory exchange of populations imposed homogeneity and created a wave of refugees traumatized by the idea that a secure sense of belonging meant uniformity.[v]

Middlesex’s return to 1922 Smyrna via The Waste Land links Eliot’s poetic assimilation of xenophobia and eugenics with the novel’s presentation of society’s aversion against “anything comprised of a combination of diverse or contradictory elements” (Middlesex, 431). The “monster” feeling Middlesex’s protagonist tries to escape from is thus linked to the healing of the trauma of forced migration as the result of nation building. As Shiv Visvanathan writes, the homogeneity and stability of democracies which appear stable and mono-ethnic today, was a creation of violence in the form of forced assimilation, forced migration or genocide (2006: 535). Where democracy has triumphed, Michael Mann notes, “it has often been tinged by organicism” (1999: 41). To the organicism of early nationalism when uniformity was central, Middlesex poses the organicism of the body as a plural entity.

In Middlesex, it is the main protagonist’s body that unravels the story told via the memory of genes. Their presence in the novel is all pervasive: “Genes embedded so deep they control our eye muscles” (Middlesex, 38). Callie’s “recessive gene on the fifth chromosome” (Middlesex, 401) is something like a divine providence pushing the story along by pushing the protagonist to recede to the past on her way to becoming Cal. His return to Smyrna is a step made towards the resolution of the lived trauma of forced migration and imposed uniformity, a concept that Cal’s grandparents had pushed to its limits by re-inventing their relationship as brother and sister and arriving as a newlywed couple in the USA thus passing down to Cal his recessive gene. The story of Cal’s grandparents before and after their escape from Smyrna are as alive as Cal’s recording of his life in the present tense and it is the amalgamation of the two that unravels the potential of a sense of self “no longer one thing or the other” (Middlesex, 363). Cal becomes his progenitors and they speak through him. At the most basic level, we see this plurality in a change of register from first to third person singular narrative indicating a change from the position of narrator to that of a witness. In the description of the morning of 13th September 1922 events seem to occur as we read about them: “And now it is all a matter of wind. 1 a.m., Wednesday, September 13, 1922. Lefty and Desdemona have been in the city seven nights now. The smell of jasmine has turned to kerosene” (Middlesex, 55).

The lived trauma created out of this experience has now become cultural (Liakos, 2011: 21) and Middlesex presents the trauma inflicted upon the characters that form the long line of people leading to Cal through the metaphor of a body concealed when kept in motion (Middlesex, 320) and transformed when revealed. At fourteen years of age young Callie sets on a journey mirroring her grandparents’ 1922 itinerary now under the “alias” of a new gender.

My grandparents had fled their home because of a war. Now, some fifty-two years later, I was fleeing myself. I felt that I was saving myself just as definitively. I was fleeing without much money in my pocket and under the alias of my new gender. A ship didn’t carry me across the ocean; instead, a series of cars conveyed me across a continent. I was becoming a new person, too, just like Lefty and Desdemona, and I didn’t know what would happen to me in this new world to which I’d come. (Middlesex, 443)

By the end of the novel, after Cal has exposed himself plunging in a pool as “God Hermaphroditus”, he eventually opens his eyes underwater and begins a new life: “Inside Hermaphroditus old tensions were roiling, trying to work themselves out. Traumas of the locker room were being released. Shame over having a body unlike other bodies was passing away. The monster feeling was fading.” (Middlesex, 494) The “monster feeling” here described, involving “old tensions”, “traumas” and “shame”, is not solely about Callie/Cal’s personal itinerary but, through him, about the end of a long journey that started in Bithynios two generations before and was coded upon Cal’s body. As Debra Shostak notes, “when Eugenides weaves his story of the hermaphrodite Cal(lie) into an account of Greek immigration and assimilation to mid-twentieth-century American culture, he implicitly overdetermines the metaphor of hybridity to refer at once to the body, to cultural identity, and to narrative structure” (2008: 384).

Being the same is a destructive idea forcing people away from home. After having witnessed – and through his narrative written about – the events that marked the life stories of his genetic line, Cal can finally return home. Standing at the entrance to his home named “Middlesex”, he finally feels at home with himself: “I stood at the door for an hour, maybe two. I lost track after a while, happy to be home, weeping for my father, and thinking about what was next.” (final sentence of Middlesex, 529)

Middlesex puts to practice The Waste Land’s stages to reach the ultimate shantih. The narrative is a constant burial of the dead, the trauma of war weighs heavy on the characters and the protagonist finds rebirth in water. Writing this piece you now read in 2022, when bodies of all forms are put to the test by wars, laws and medicine, this turning of the poem into a ritual of heterogeneity sounds like a Waste Land for a new century.

[i] Harvey Gross, “Metoikos in London”, Mosaic, VI/1 (Fall 1972), 151; Robert A. Day identifies Eliot’s City with that part of London along the north bank of the Thames “which contains modern London’s financial district and most of England’s mercantile and monetary power” in “The ‘City Man’ in The Waste Land: The Geography of Reminiscence”, PMLA, LXXX/3 (June 1965), 286. Lawrence Rainey draws a map of the “City” in Eliot’s time identifying all the locations evoked in The Waste Land. He notes that the homes of the living inhabitants were “consumed by a voraciously expanding commercial life”, to which much of the inhuman desolation suffusing the poem owes its source. See Lawrence Rainey, The Annotated Waste Land with Eliot’s Contemporary Prose, 2nd edn, New Haven, CT: Yale University Press, 2005, 9-11, 67. David Roessel, “‘Mr. Eugenides, the Smyrna Merchant,’ and Post-War Politics in The Waste Land”, Journal of Modern Literature, XVI/1 (Summer 1980), 175, argues that Eliot on one level recalls the Cannon Gate (when Constantinople fell to the Turks in 1453), but deflates the great national dream of recapturing Constantinople by linking it to the fulfilment of a transient desire in a Brighton Hotel.

[v] The Treaty of Lausanne (23 July 1923), signed between Turkey and Greece, set the precedent of a compulsory exchange of minority populations between the two countries.

poetic reality no19: The Waste Land’s Centenary Part 2 – A Waste Land in Athens? The Afterlife of Ruins in Greek Urban Poetics