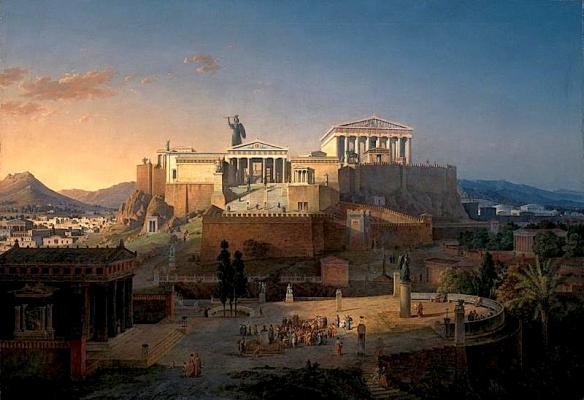 Look once more, ere we leave this specular mount,
Westward, much nearer by south-west; behold
Where on the Ægean shore a city stands,
Built nobly, pure the air and light the soil—
Athens, the eye of Greece, mother of arts
And eloquence, native to famous wits
Or hospitable, in her sweet recess,
City of suburban, studious walks and shades.
See there the olive-grove of Academe,
Plato’s retirement, where the Attic bird<
Trills her thick-warbled notes the summer long;
There, flowery hill, Hymettus, with the sound
Of bees’ industrious murmur, oft invites
To studious musing; there Ilissus rowls
His whispering stream. Within the walls then view
The schools of ancient sages—his who bred
Great Alexander to subdue the world,
Lyceum there; and painted Stoa next.
There thou shalt hear and learn the secret power
Of harmony, in tones and numbers hit<
By voice or hand, and various-measured verse,
Æolian charms and Dorian lyric odes,
And his who gave them breath, but higher sung,
Blind Melesigenes, thence Homer called,
Whose poem Phœbus challenged for his own.
Thence what the lofty grave Tragedians taught
In chorus or iambic, teachers best
Of moral prudence, with delight received
In brief sententious precepts, while they treat
Of fate, and chance, and change in human life,
High actions and high passions best describing.
Thence to the famous Orators repair,
Those ancient whose resistless eloquence
Wielded at will that fierce democraty,
Shook the Arsenal, and fulmined over Greece
To Macedon and Artaxerxes’ throne.
To sage Philosophy next lend thine ear,
From heaven descended to the low-roofed house
Of Socrates—see there his tenement—
Whom, well inspired, the Oracle pronounced
Wisest of men; from whose mouth issued forth
Mellifluous streams, that watered all the schools
Of Academics old and new, with those
Surnamed Peripatetics, and the sect
Epicurean, and the Stoic severe.

Featured Image: This architectural recreation of ancient Athens matches the vision which Satan conjures up in Paradise Regained Book IV, in order to tempt Christ away from his mission by devoting himself to the study of the Greek classics. This painting by Leo von Klenze (1784-1864) shows ancient Athens with its Acropolis intact, and the Areus Pagus (cp. Milton’s Areopagitica pamphlet). It is found in the Neue Pinacotek, Munich. Von Klenze was a German neoclassicist architect, painter and writer at the court of the Bavarian King Ludwig I.