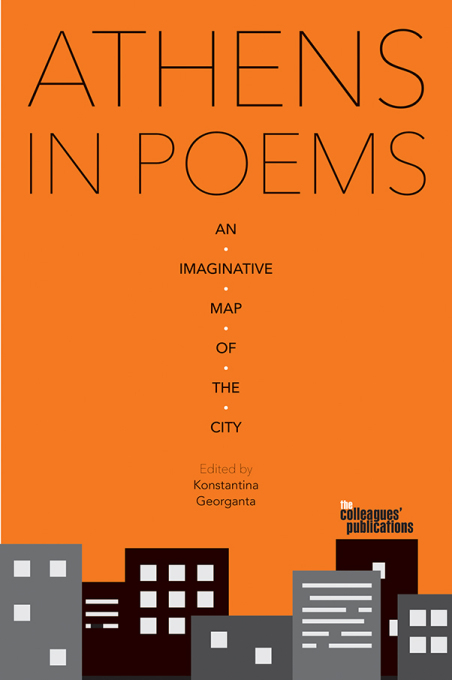 An Imaginative Map of the City

A book of poems by well known Greek poets from late 1880s until nowadays.

A special section with historical and general information for every Athens spot as referred in the poems completes the edition. Thus a virtual map is created, useful to every visitor of Athens.

Moreover the book has bibliography and biographies of the poets.

Athens in Poems reveals the glorious palimpsest that is Athens mapping the city one poem at a time from the 1880s to 2010s. Walk through the streetscapes of Athens, reflect on the city’s historical development and see how poetry becomes attentive to the dynamic instability of the urban space. Watch as the city is built with language and create your own imaginative map of Athens. Wander around Athens of the 1880s, imagine the circular Omonia Square of the 1930s, visit the Shooting Range of Kaisariani during the Nazi Occupation and reach the gate of the Polytechnic School in the 1970s. Look at the capital as a huge fish tank in the 1980s, discover the bastion of Kokkinia, get to love the city’s concrete block of flats and pause for a while to have a glass of ouzo at the Athens Railway Station. Have a quick stop at the Perama district just off Pireaus and, at the start of a new century, find a chrysalis beneath Acharnon Avenue and voyage in Athens as in an ocean you can call your own. This is a map of Athens you may call your own.

Guide of Athens Useful to the Public [1886] by Georgios Souris

Tram and Acropolis [1938] by Nikos Engonopoulos

An Incident in Athens [1950] by Dinos Christianopoulos

The Door of the Polytechnic [1974] by Yannis Ritsos

Drinking Ouzo Mostly Alone at the Station [1986] by Giannis Varveris

The Fabulous Vigilance of a Fertile Line [2001] by Maria Tataraki