Urban frame no7: Bleeding poetry in an urban non-place. 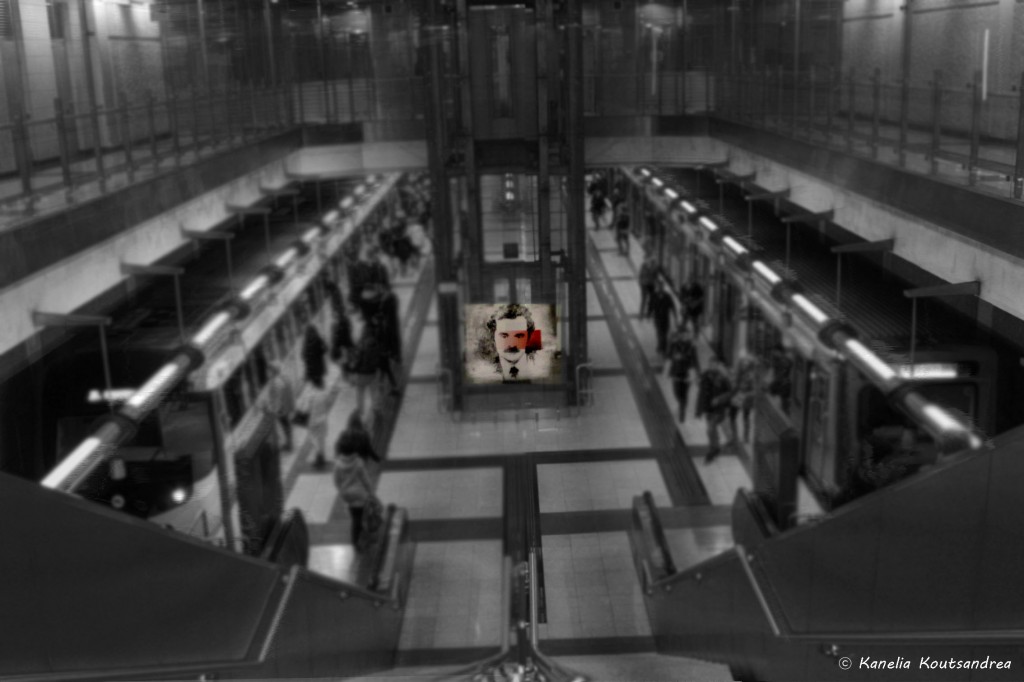 Urban frame no7: Bleeding poetry in an urban non-place.

May 1, 1978; Vouliagmenis Avenue. At 1.58 in the morning, a green fiat driven by Alekos Panagoulis goes off course and crashes into a basement garage. The driver is instantly killed. 28 years later, a new subway station opens in the area and is named the ‘Agios Dimitrios-Alexandros Panagoulis’ station. And so, a single spot in the city encompasses two entities – a place of loss and memory and a non-place, part of the city’s transportation network.

Alexandros Panagoulis was a Greek politician and poet but he is mainly known as a rather tenacious and determined fighter against the Greek dictatorship (1967-1974). His anti-regime action began when he deserted the Greek army, which operated under the commands of the Greek military Junta, and peaked with the attempted assassination of the dictator George Papadopoulos on August 13, 1968. The attempt failed. He was arrested and tortured both physically and psychologically. In a letter he secretly wrote in prison for the Council of Europe, he enumerated the tortures he suffered in a long, appalling, telegraphic list, detached from the pain and the humiliation, as if he was witnessing them from a distance.

«Whipping with a cable or a wire all over my body-Beatings with batons on the soles of my feet causing a fracture on my right foot, beatings with iron sticks on my chest and my rib cage causing fractures on two or three of my ribs, cigarette burns on my hands and genitals, passage of a fine needle of conductive metal in my urethra and heating its other end with a lighter, obstruction of my respiratory tracts with their hands until I was suffocated, kicks, punches, hitting of my head on the walls and the floor, deprivation of sleep, violent feeding by the military doctor, permanently in handcuffs… »[1]

Afterwards Alekos Panagoulis was brought to trial. He was sentenced twice to death. He was transferred to the military prison in the island of Aegina in order to be executed. However, his death penalty was cancelled under the pressure of the international public opinion. The foreign media were not subjected to the Greek Junta’s censorship, thus the public in Europe had followed Panagoulis’ trial uncut and had witnessed his apology that seemed as if it was coming from an ancient Greek tragedy.

«Indeed, I am aware that you will condemn me to death. But I will not stand down, your Honors. On the contrary, I accept this penalty hence. For a real fighter’s swansong is his death rattle in front of a tyranny’s firing squad. »[2]

His myth was beginning to grow; the myth of a modern tyrannicide struggling for freedom, alone, resisting willfully, and refusing to concede. Eventually he was led to the prison in the Bogiati military camp, located 25km northwest of the Athens city center. A few weeks later he managed to escape; he was betrayed and returned to prison. There, in a dark, narrow cell, built especially for him, with a low ceiling and a cypress tree in the entrance so as to resemble a grave, Panagoulis remained in strict isolation for more than four years; a concrete cage 3×1.5m wide, a bed, a primitive toilet and a 1.80×0.90m area available for him to move.

There, inside that grave, Panagoulis wrote dozens of poems about oppression and tyranny, resistance and freedom. He was writing constantly, in small oblong pieces of paper, which he was sending outside of his cell for the world to know. He was hiding them in the seams of his trousers when he sent them for washing or he was throwing them in the garbage for a guard to collect them. He was writing with a pen, when he had one, or with his own blood and a matchstick on an empty pack of cigarettes, when the director of the prison denied him ink and paper.

I’ve livened up the walls
I’ve given them a voice
a friendlier company to become
and the guards asked
where the paint was got
The cell walls
kept the secret safe
the mercenaries looked but could find none
For not for a moment did they think
my veins to consider.

After the anti-regime protest of the Greek navy in May 1973, which,  despite its failure and the arrest of its leaders, had raised an international interest as regards the political situation in Greece and showed the opposition of a part of the country’s armed forces to the military junta. As a result, Dictator Papadopoulos attempted an outward liberalization of the regime. Thus, general amnesty was awarded to every political prisoner. On 21 August 1973, after five years, or 1832 days, of imprisonment, isolation, violent tortures, humiliation, suffering and deprivation of his fundamental human rights, after 25 hunger strikes and three escape attempts, Alekos Panagoulis came out of the grave that the Greek military junta had built for him alive.

On 17 November 1974, one year after the Athens Polytechnic School uprising and six years after the day he was sentenced to death by the martial court of the junta, Panagoulis participated in the first democratic elections after the fall of the dictatorial regime. Although he had no favourites when it came to political parties, he was included in the candidates of the party of the centrists. He claimed that this party was his Trojan horse in order to get into the Parliament and continue to struggle for democracy and freedom. He was marginally elected as a Member of Parliament.

His purpose was to expose the politicians who had collaborated with the military junta, those who had allied themselves with the dictatorial regime wearing the mask of the anti-fascist, representing more than anything else the very essence of Power; the cold, arrogant, perpetual power that wears different mantles in order to remain intact and dominant. When he gathered proof that one of the politicians who had collaborated with the dictators was Dimitrios Tsatsos, a member of the same political party as himself, he had a dispute with the party’s leadership and seceded. He continued his political career as an independent Member of Parliament and had another severe clash with Evaggelos Averof, the Minister of Defense. Panagoulis openly accused him of having relations with the military junta and aspirations for the establishment of a new dictatorship disguised under a pseudo-democratic cloak.

A Greek newspaper had agreed to publish the evidence that Panagoulis had in his possession, which demonstrated the role of certain high-level politicians to the rise and fall of the dictatorial regime. A few days before the publication of these files, Panagoulis was killed. His death was officially attributed to a car crash. However, there were those – and they were not few – who talked about a political assassination.

At a first level of observation, death and loss concern the individual. However, they can be equally linked to the community and leave a strong imprint on the collective subconscious. When death, as an inevitable event, pertains to a subject who, beyond his individuality, bears a distinctive position among the whole, when it comes to an important artist, a scholar, a teacher or a leader, then the loss is not just that of a person who died; it is a loss of a symbol, an idea. As such, it scathes society. At the same time, the site where such a loss took place acquires an identity, a distinctive mark in the historical continuity; it becomes a topos, a place. It has acquired a new dynamic; it is seen in a new context. It wears, fades, comes alive again but it does not disappear. This place, once created, it cannot die; it can only continue to exist towards the future, carrying its past and constituting the evidence of this very past. A place exists and moves like time, which, no matter if circular or linear, it has one, prescribed direction.

The city unfolds and happens among places; among foci of meaning and memory, among theatres of anthropocentric experience. Yet it also happens among non-places; among circulation, communication and consumption networks, geometrically defined spaces like airports, traffic networks or shopping centres. Places come from the past, they have captured time (signalling a stasis) and they mark a stop in time, they signal points where the excavation of time brings on the surface fragments of memory and lights the layers of urban continuity. On the other hand, non-places concern the present; they are the movement and the speed, the frenetic rotation of images and their greedy consumption. Still, they are the purity of need and the geometry of evolution. Once a place coincides with a non-place a dipole emerges where each one of the poles is lightened by its opposite. The place becomes part of the active present avoiding musealization. The non-place acquires a point of reference that helps it get away from its conceptual nothingness.

On the spot where Alekos Panagoulis died in Vouliagmenis Avenue , there is today a subway station bearing his name. The station is used by thousands of passengers every day. In its platform there is a portrait of the fighter, a work of the artist Kostas Hercules Georgiou, entitled «In the memory of Alexandros Panagoulis». Thus, Panagoulis’ name and image become repeatedly part of the daily routine of a significantly large crowd. There, in the place of loss, the past and society’s memory visit the present and become integral components of a living and vibrant reality. It is here that the motion encounters the stasis and the image encounters a meaning.

Alekos Panagoulis’ figure is a symbol of the anti-dictatorial struggle in Greece and of every struggle against oppression and tyranny. He dynamically defended democracy with his actions, strength and poetry and also with his attitude during the trial of the dictators, when, while testifying in court, he stated: «If in a dictatorship tyrannicide is a duty, in times of democracy forgiveness is a necessity. In times of democracy, justice is not served by opening graves.»[4]  He was a lone visionary, a hero of Sophocles or Cervantes, who fought for justice and freedom and died for it. Nonpartisan and independent as he was, he was solely guided by the World Ethics and a sentiment of Justice. [5]

It does not matter if the majority of the passengers who use the subway station in Vouliagmenis avenue do not observe his portrait. Some of them will. Neither does it matter if the majority of those who see it don’t know his story. Some of them will learn it. And when they do, they can choose whether to follow the advice we hear voiced in his poetry, which was written inside his strange grave in the prison of Bogiati:

Do not cry for me
even though I die
for help me you cannot
Just take a look at that flower
it withers away and
for this I speak
Water it.

For the article in Greek, see here.