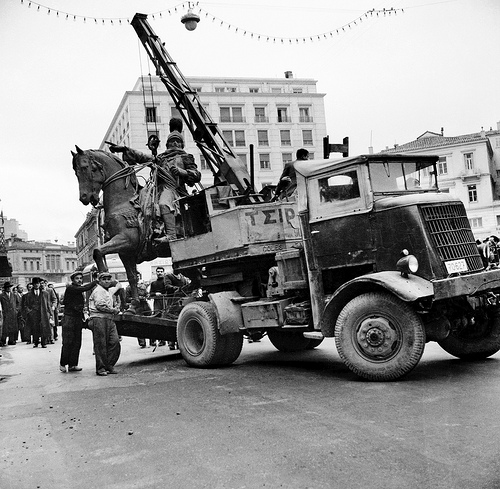 Read in the November 2015 issue of Transnational Literature:

The problem of Athens: ‘The most famous and one of the oldest cities in Europe, but it’s hard to think of it as alive.’ For the most part, Athens was presented as a city whose past was superimposed upon the present making the present – along with all its varied layers – non visible. That was the case in the beginning of the second half of the twentieth century when poet and radio practitioner Louis MacNeice wrote a 60-minute radio play for the BBC Home Service on Athens. At the time, the city was in the process of becoming the stage where a new war would take place as it is not an exaggeration to suggest that the Cold War started in the Greek capital. In a letter he wrote whilst in Athens, MacNeice noted that since the war he had been ‘a staunch upholder … of the principle that Europeans must try (however desperate the attempt!) to escape both the Russian brand of communism and Americanisation’:

Western Europe & certain other countries … should try hard to retain their right to independent opinions, e.g. should not let American big business impose its will on them regardless. The raison d’être of such an independent group would not be to stay out of war if it came … but would be to prevent it coming.

Portrait of Athens was aired by the BBC Home Service on 18 November 1951 and this article explores how in this, previously undocumented, play MacNeice placed Athens in the map of cities that had witnessed severe traumas, which the play unveils in a representation of the city in the form of a palimpsest. In the Portrait, we find William Gladstone’s marble statue in the centre of the city, right in front of the National Library and right across from the centre of the ECA (Economic Cooperation Administration), half way between Constitution Square and Concord Square – ‘Constitution square … where the troubles started … in 1944 after the liberation’ and Concord Square, ‘the front line between the Reds and the British’ – while the people have to walk through the ghosts of SS officers to get to their jobs for a pound a day attending to the ‘bobbins in the spinning mill, factories of whirling bobbins stilted like kk guns’ (PA). The blend of history with the people’s everyday realities made 1950s Athens not only a symbol of the past but a new idiom speaking of the necessity for an increasing awareness of history to complement one’s consciousness of individuality. As John Berger wrote in 1972, ‘every image embodies a way of seeing’ and, even though images were first made ‘to conjure up the appearances of something that was absent,’ later the vision of the image-maker was also recognized as part of the record: ‘An image became a record of how X had seen Y. This was the result of an increasing consciousness of individuality, accompanying an increasing awareness of history.’ ‘Ladies and Gentlemen, bookworms and globetrotters, this is Athens. Look at her now!’ (PA).

An Athenian Nocturnal Archaeology III: On Alexander the Great Street