Graffiti project against racism at the 1st High School of Drapetsona 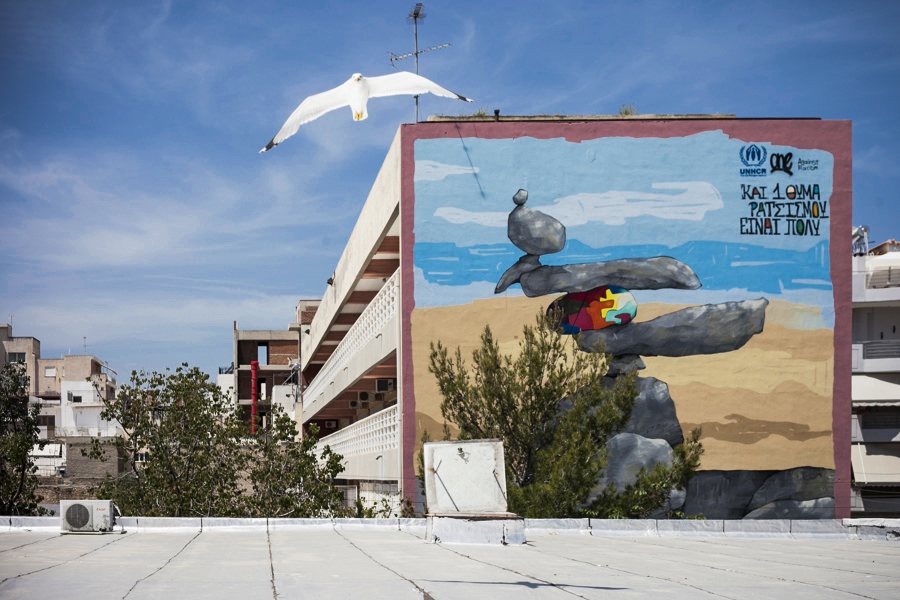 Graffiti project against racism at the 1st High School of Drapetsona

In the framework of the antiracist campaign of the UNHCR’s Office in Greece, a large graffiti project against racism was created at the 1st High School of Drapetsona. The mural was designed by artists Kez and Pupet from the “Urban Act” group, which functions under the auspices of the Ministry of Culture, Education and Religious Affairs.

“Our goal was to react to racism’s dark face through color” stated Ketty Kehayioylou, Communications and Public Information Officer at UNHCR Greece. “Across the walls, we seek to tear down stereotypes. Using art as a weapon, we want to demonstrate the need for peaceful coexistence and mutual respect”.

The mural depicts a colorful rock, as an integral part of a mound of boulders, which symbolizes society as whole. Two people are attempting to remove the rock, resulting in the imminent risk of the whole structure collapsing on them. “Diversity is the cornerstone of community. The design calls for citizens to reflect on the dangers of eliminating it”, explained Ms. Kehayioylou.

The creation of the project was supported by the Keratsini-Drapetsona Municipality. “We are attempting to show the beauty of diversity in a town which has historically hosted many refugees”, stated the mayor Christos Vrettakos. “Prejudice and stereotypes find fertile ground in the midst of a crisis. Through this image, we are sending the message that our town wishes to unite people, to offer equal opportunities and possibilities to anyone who chooses to be here. I would like to thank the UNHCR because without it, it would have been difficult to illustrate the message we had in mind”.

Students of the High School participated by painting colorful faces on the lower parts of the school perimeter. “School environment intervention, together with parental communication, is very important so that children understand that ‘1 victim of racism is too many’, as noted by the UNHCR. We must explain to students that we are a country which has also sent out many immigrants of its own, and that we are obliged to face the Other in a way that depicts our culture and humanity”, added Kyriakos Patriarheas, the headmaster.

editorial no1: ένας χρόνος Athens in a poem