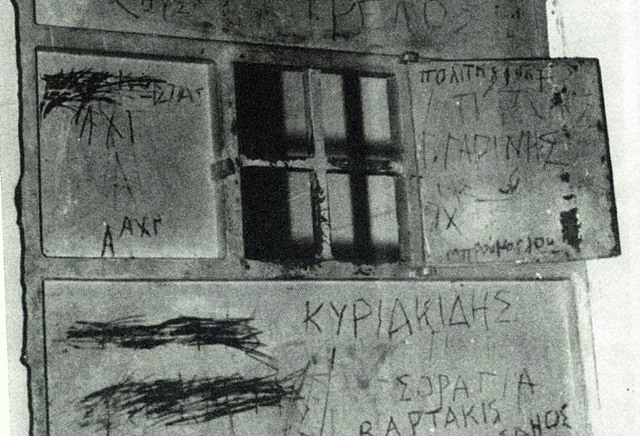 “18 Mpoumpoulinas Street. A grim, sombre building. Four stories? Perhaps, you cannot remember. Didn’t it formerly host the Ministry of Labour services? Maybe, you are not sure.”[1]

A sub-branch of the main security offices of the Colonels’ junta in Athensin 18 Mpoumpoulinas and Tositsa Street. Across the road on the right one would find the National Technical University of Athens, right across there was the National Archaeological Museum, while on the next corner was positioned the Central Maternity Hospital of Athens. Four buildings forming an absolutely absurd urban junction in the centre of 1967 Athens.

The building in Mpoumpoulinas Street was one of the detention centres for political prisoners captured during the Greek Dictatorship (1967-1974). It hosted the offices of interrogators and police officers as well as detention and solitary cells. On the fourth floor there were the cells for those facing minor accusations and the well-known prisoners that attracted international public interest.

“Four floors. The windows of the first floor are placed below arches. Above the entrance there is a royal crown on a wooden grey-blue background. On the top, there is a terrace.” [2]

Mpoumpoulinas’ terrace, a place of torture.

“After the fourth floor there is a sign: No entry. The staircase leads to the terrace. There is a small room there, like a laundry. A rectangular table, narrow; so narrow it looks like a bench. They call it “the bench”. On its edge there are ropes to tie the prisoner’s feet. Several tools hang on the walls or lay on the table: hammers, sticks, bamboo canes, metal wires, oblong sand bags. On the corner, an empty barrel is used as a resonance container. On the left, two showers. There is a hole in the wall; a hole big enough to fit a man. Part of the wall has no plaster, the plaster has fallen. It is there wherethey beat the prisoners heads’ in.” [3]

And, all around, buildings, more terraces, more balconies, smaller or larger, with flowers or not, with lights, probably, with people, most certainly so.

So if someone is looking for an apartment and finds one here, across the terrace, will they rent it? A penthouse indeed. When they took me up at the terrace,  the fresh air made me dizzy at first. Till they put me in the laundry room I got to see Lycabettus hill and two or three of the buildings around. Perhaps they will listen, I thought, when I scream. Then, of course, the motorcycle’s engine started and the noise covered my screams. I am sure they listen, even if the laundry room is insulated. They listen. And what do they do? No one knew, no one saw the smoke from the crematoria in Dachau. They knew nothing…”[4] 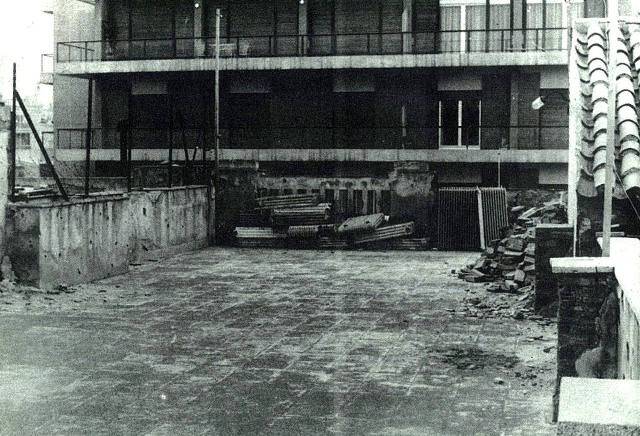 The terrace in 18 Mpoumpoulinas Street and the apartment block in Tositsa street opposite.

The four-storey building of the Central Security Offices of Athens does not exist anymore in Mpoumpoulinas Street. It has given its place to an apartment block, which remains ignorant  and unsuspecting of the memory of the place its massive volume now occupies. Constructed in 1974 – according to the marble sign on its entrance – the block replaced the building with the gory terrace fast, before the cries of pain from the beatings and the phalanx or the screaming from the isolation cells could abate; before the victims’ wounds could heal, the wounds from whippings, electric shocks, flesh burnt by cigarettes, the uprooting of hair and nails, the psychological tortures, the virtual executions, the threats against the life of one’s parents, brothers or partners. Before the building on number 18 could become, from a place of horror, a place where all human rights were abolished, a place of memory.

Considering the fact that the block that is to be found today on number 18 was built in 1974, it should be assumed that the building in Mpoumpoulinas Street was demolished during the Greek Dictatorship, possibly in an effort to cover up the atrocity taking place within its rooms. Besides, the tortures of the political prisoners had already become widely known since 1969, when former prisoners managed to escape to Europe and testify in the European Council Committee about the regime’s practices.[5]

The building disappeared from the urban fabric so it could not become a testament to its past. However, its past was related to unimaginable, cruel images and inhuman, brutal behaviors and so the building’s presence within an active urban environment after the collapse of the undemocratic regime would have possibly resembled a festering sore that could not heal. It can be argued that in a time of transition, when society was trying to recover form a painful period, the absence of this building from the everyday urban reality- even if this occurred for entirely different reasons- contributed to the healing process of an extensive collective trauma.

One could also say that the ones who did not experience the tortures up on the terrace of Mpoumpoulinas’ building, the bugs in the dark isolation cells, the filthy and damp detention rooms, the dried blood on the walls, the merciless interrogators, the despair, the pain and the humiliation, cannot understand the extent of the fear and horror that actually took place behind its walls, no matter how hard they try; as it is not possible for someone to imagine the horror of the Nazi concentration camps- if he did not live in one of them- even if he visits Auschwitz. On the other hand, those who did experience the cruelty of the Greek Dictatorship do not need a building in their surroundings to help them remember.

“For forty years now, the bitter spring of ’68 punctures my memory like a meteor, like a train crossing the night with lit windows- dark/light, suffocation/respiration, descent to death/ death by death…[6]

A city is a complex composition of what can be seen and what cannot; of what is present and what absent. Absence and silence can be significantly meaningful and dynamic elements of the urban environment. Yannis Ritsos writes: “Whatever has left, takes roots here, in the same place, saddened, speechless…” What has left becomes part of the collective memory and is kept alive and present through its very absence. It does not need marble inscriptions, hero busts or any other material form in order to be preserved. In any case, which monument or sign could reflect the horror of the tortures? Is there a material or a shape that can express pain and humiliation or absolutism and cruelty? Perhaps only a ruin; if the building in Mpoumpoulinas Street was left to decay and was transformed into a dissolved, repugnant, defective part of the urban fabric, then and only then could perhaps its form reflect the horror of the former function it used to be a host of.

Therein lies the main difference between history and collective memory. History is reflected upon monuments while collective memory is expressed through literature, poetry, theatre, silence, even through absence. History is written or constructed and manipulated by the forces of power, by the State. Collective memory is composed by society itself, it is shaped by personal testimonies and experiences and hence it is free, alive, active and independent;therein lies its dynamics.

The building of the Central Security Offices of Athens in 18 Mpoumpoulinas Streetdoes not exist anymore, but it does not matter. Mikis Theodorakis’ lyrics exist in its place and they always will.

At noon they strike in the office
I count the knocks I count the pain
I am an animal in a slaughterhouse
today it’s you, tomorrow me…

[Original article in Greek can be found here]

[5] In December 12 1969 the Military Junta decided to withdraw Greece’s participation from the Council of Europe whose member had been since 1949. The regime was forced to this decision due to the appeal that was made against Greece. The “Greek Case” as it was named was based on a number of testimonies from former political prisoners who were brutally tortured in the Greek detention centers and managed to escape to Europe.