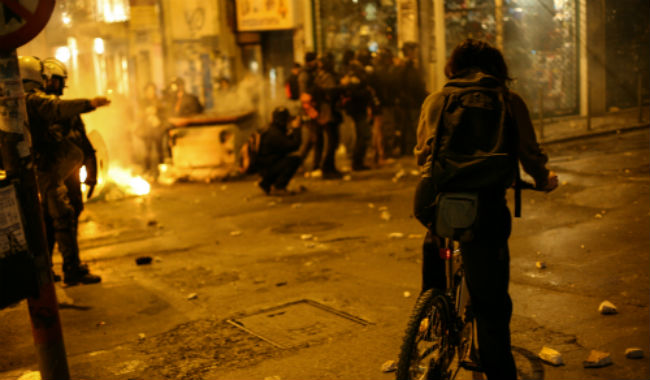 In 1974, Vayenas included in his first poetry collection Field of Mars (referring to Pedion Areos, an Athenian park), a poem called ‘Death in Exarchia’ (trans. by Margaret Kofod):

They told me you were dead. And now I find you
in the café playing backgammon with the living.
Even winning. And wearing a tie.
You never wore a tie.
You never went to the square.
You always shut yourself up in that house
silently watching the neighbours and passers-by.

They told me you were dead. Who should I believe?
You vanished suddenly without saying a word.
Without even leaving a note.
Your shutters were closed. Your bell broken.
The dog broken-hearted. And the lights out.

Is it you? Or not? Who should I believe?
How your voice has changed.
The others say nothing. They watch you play.
They watch you throwing the dice and smiling.
And winning all the time. All the time.

You never won. You were always the loser.

P.S. What we see here is the tragedy of a sudden death that cannot be properly mourned and so it haunts the speaker with apparitions of the person lost. The message at the beginning of the poem is not trusted – probably because of the junta’s control – while the finality of it, ‘They told me you were dead’, repeated twice, allows no room for an inquiry over the cause and circumstances of death. By the third stanza the speaker openly doubts what he sees and hears because he seems to share the same solitary and secluded existence as the now dead – everyday rituals are easily identified, i.e. the shutters, the lights, the companion ‘broken-hearted’ like Odysseus’ faithful Argos – while the living ‘others’ say nothing but only watch, perhaps complicit with the staging of a scene orchestrated to overwhelm and upset the speaker and so disrupt his ability to deduce clearly. Or, there is a chance that a performance was already at play (his death staged) and the person’s true self is now only visible; his frequenting the open space of the café, showing signs of respectability by wearing a tie, and winning. Perhaps a ‘Death in Exarchia’ is never really what is seems; a re-reading of the poem and its possibilities make the reader feel unsettled as they struggle to picture both the ghostly scene in a familiar Athens setting and the degree of familiarity of the person watching the scene and asking the questions with the person playing a game of backgammon with the living. This is why the closing line ‘You never won. You were always the loser’ appears to also address the audience since what was happening in Exarchia at the time concerned the future of the country and so the ‘death’ of the poem’s title may bear traces of a resurrection of the once silent and losing to winning subjects. The promise of change can be found in the gap between the line ‘And winning all the time. All the time’ and ‘You never won. You were always the loser’ which leaves to the reader the option of choosing a side. The poem ‘Death in Exarchia’ becomes then a piece encouraging a conversation with one’s self while the game of backgammon – on a table whose marble slab was in reality part of a tombstone – transforms the cafeneion into a threshold of the underworld where one is likely to find the shadows of those who have passed on but also a creative space where new symbols are created and a future rooted in the past is imagined.
K.G.

Η Τέχνη του Δρόμου στα Εξάρχεια – inExarchia.gr
Τα εντελβάις των Εξαρχείων
Login to Athens in a poem
Reset Password
Enter the username or e-mail you used in your profile. A password reset link will be sent to you by email.
Our website uses cookies, mainly from 3rd party services. Define your Privacy Preferences and/or agree to our use of cookies.
Privacy Preferences